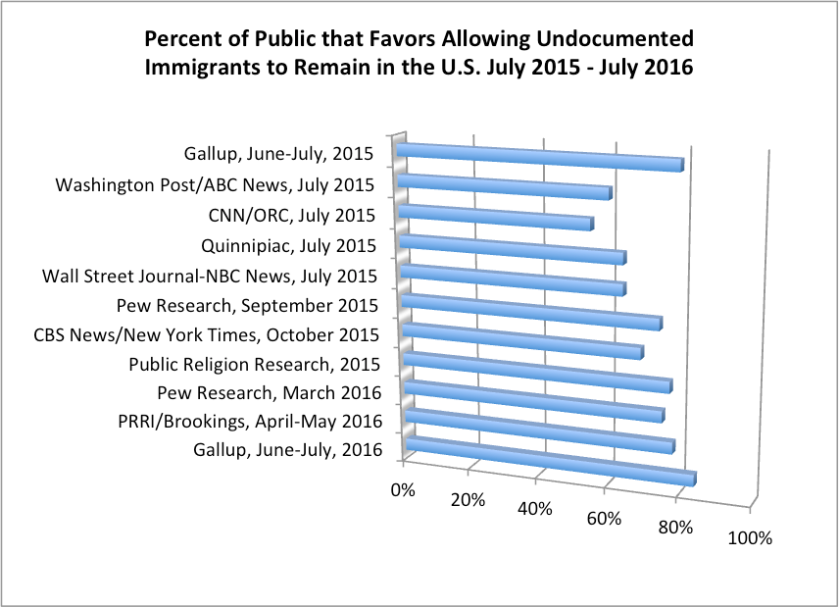 On August 25, the Pew Research Center released a new national poll on American attitudes towards undocumented immigrants. Taking a look at the results, it is not hard to understand Donald Trump’s apparent “softening” on immigration during the same week.

Pew asked respondents what they thought the priority should be in the government’s handling of illegal immigration. A plurality, 45 percent, said that the government should focus on both “better border security and stronger enforcement” and “creating a way for immigrants already here illegally to become citizens if they meet certain requirements.” An additional 29 percent said that the latter—allowing undocumented immigrants to stay and become citizens—should be the priority. In total, then, 74 percent of the public in this survey favors giving undocumented immigrants a path to citizenship if conditions are met.

This is consistent with polls taken over the course of the past year. Mr. Trump has been (until a week ago) unrelenting in his efforts to tar all undocumented immigrants with the crimes of a few. It hasn’t had much effect on public attitudes, which have stayed in a range of 55 percent to 84 percent in favor of allowing undocumented immigrants to stay.

Someone in Trump’s camp must occasionally look at polls, and someone perhaps told him that the public doesn’t buy his line on immigrants. So why continue to press it? A softer stance, though, upsets his base. We’ve watched his position ping pong back and forth, “soft” and “hard,” until he indeed accomplished one campaign promise: he’s made our heads spin.

More detail on public attitudes on a path to citizenship for the undocumented, as measured in polls over the past year, can be found in this paper I wrote for the National Immigration Forum.