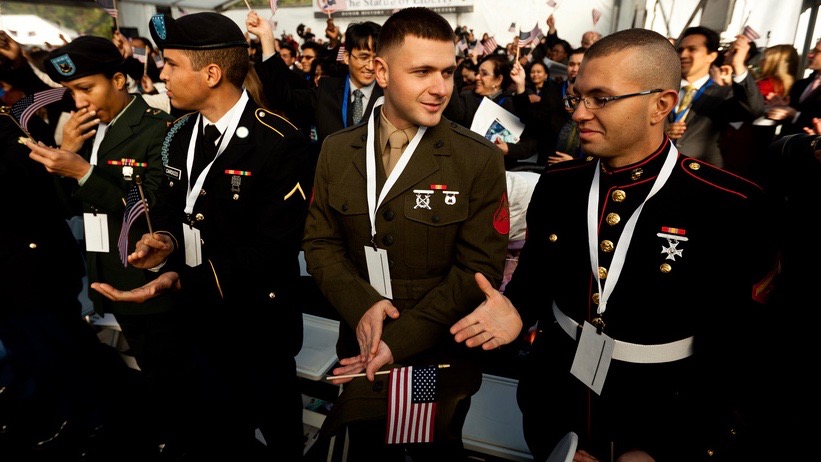 Immigrants have been serving in our armed forces since the beginning of our republic. At times, a significant portion of our military was foreign-born. Roughly a quarter of the Union Army during the Civil War was foreign-born. Our military force was 18 percent immigrant in World War I. During World War II, Congress made it easier for immigrants serving in the military to become naturalized citizens.

In 2015, about 40,000 immigrants were serving in our armed forces, and about 5,000 noncitizens enlist each year. Approximately 11 percent of all veterans are either foreign-born, or came from families where at least one parent was an immigrant. About 20 percent of our Medal of Honor winners are immigrants.

Military service has always been a tool for integration, as military service offers equal opportunities for promotion, future education, and skills training.

Immigrants will continue to be an important component of the armed forces in the future. With the economy continuing to recover from the Great Recession of the late 2000s, there are more opportunities in civilian markets, and military recruiters are having more difficulty finding eligible young people willing to serve. For a variety of reasons, only 13 percent of 17- to 24-year-olds were eligible to serve in 2015. Of a total target recruitment population of 33.4 million, the Army estimates that just 0.4 percent would be qualified and willing to serve, according to the Army Times.

Despite a more challenging recruitment environment, a large number of potential recruits are kept from enlisting in the military. These are young people who were brought to the U.S. as children, and have grown up here. Many of these individuals would be eligible for the DREAM Act, which provides a path to legal status through military service (as well as education). Congress has failed to pass the measure on several attempts in the last decade, and the bill is again before Congress. Many high-ranking military officials have supported the DREAM Act in the past, as it would add to the pool of potential recruits the military needs. END_OF_DOCUMENT_TOKEN_TO_BE_REPLACED

Deferred Action for Childhood Arrivals (DACA), an initiative of the Obama administration that has proven to be an enormous success with the 740,000 beneficiaries of the program, has yielded gains not just for the individual beneficiaries, but also for the communities in which they live, their employers, and government at all levels.

Ending the program, as the president-elect has vowed to do, comes with an economic downside. If DACA recipients lose their work authorization and no longer can work, they will lose their earnings, the economy will suffer and the government will lose tax payments. Two recent studies have estimated what the end of the DACA program would cost the U.S. economy, the Medicare and Social Security systems, and employers who will incur costs if they are forced to replace their workers.

Once in office, the new Administration will have to ask itself whether it really makes sense to have employers, communities, and governments incur such costs to reverse an initiative that has not only been a tremendous success for its recipients, but also popular with the general public. One can only hope that, after the transition has taken place, the business sense that Mr. Trump is reputed to have will translate to common sense with regards to the DACA initiative.

Amidst all the talk from immigration hardliners, including the incoming president, of ending President Obama’s wildly successful program to protect undocumented immigrants brought to the U.S. as children, America’s college and university leaders are speaking out to defend their students. Hundreds of education leaders across the country have signed on to a “Statement in Support of the Deferred Action for Childhood Arrivals (DACA) Program and our Undocumented Immigrant Students.”

The statement, organized by Pomona College in California, includes all of the nation’s Ivy League Universities as well as the nation’s largest four-year public university system, the California State Universities. The statement reads in part, “…DACA should be upheld, continued, and expanded. … This is both a moral imperative and a national necessity. America needs talent — and these students … are already part of our national community. They represent what is best about America, and as scholars and leaders they are essential to the future.”

President-elect Trump has favored a hard-line message on immigration, but the public does not support deporting these young people, who are American in all but their papers.

Read more about the effort of colleges and universities to protect undocumented students on my post on Immigration Impact.