On June 3rd, the Office of Immigration Statistics of the Department of Homeland Security released its fiscal year 2013 statistics on naturalization. These statistics give us a look at how many persons are becoming citizens, what are the top countries of origin, and which states and cities have the most new Americans.

How many are naturalizing? 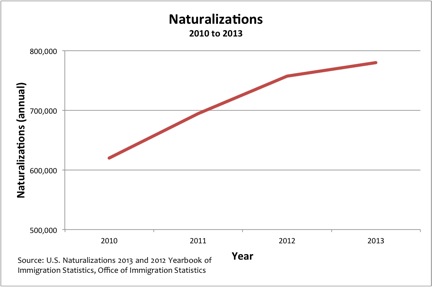 In the government’s fiscal year 2013 (which ended September 30, 2013) 779,929 immigrants became citizens. This is a slight increase from the year before. In fact, since 2010—when naturalizations dipped to their most recent low point after the government caught up with a surge in applications caused by a hike in the application fee—naturalizations have been steadily increasing. Still, the number of immigrants being naturalized is not quite keeping pace with the number who are becoming permanent residents—a little more than one million per year in recent years.

Mexico is the top country of origin for our newly naturalized citizens. In 2013, India replaced the Philippines as the number two country of origin, but those three countries have been in the top three for the past three years.

Where are immigrants naturalizing?

The paper from the Office of Immigration Statistics is available here.

This article was written for the National Immigration Forum, and appeared on the website of the New Americans Campaign.

As Congress returns from a two-week recess, we are still awaiting movement on immigration reform in the House. While there is still no sign of concrete accomplishment in the House, the tension between the two factions of House Republicans continue to break the surface and create news for immigration reporters always looking to write immigration reform’s obituary.

An example: Jeb Bush, former governor of Florida and a potential Republican presidential candidate, created a stir when he said of undocumented immigrants,

“Yes, they broke the law, but it’s not a felony. It’s an act of love. It’s an act of commitment to your family. I honestly think that that is a different kind of crime that there should be a price paid, but it shouldn’t rile people up that people are actually coming to this country to provide for their families.”

As usual, any suggestion that undocumented immigrants be treated with something less than mass deportation caused some on the right wing of the Republican Party to have an apoplectic fit. However, there were also prominent voices within the party who came to Mr. Bush’s defense.

END_OF_DOCUMENT_TOKEN_TO_BE_REPLACED

An article from the March 25 Boston Globe is a reminder that America is increasingly diverse.

“On the hard road to US citizenship, black immigrants are increasingly gaining ground in Massachusetts and the United States, expanding the possibilities for political power and changing what it means to be black in America.”

In Massachusetts, according to the Globe, black immigrants comprise about a third of the black population, and a majority of black babies born today have an immigrant mother. While Massachusetts is way ahead of the nation in these statistics, more black faces are appearing at swearing-in ceremonies for new citizens all across the country.

In recent years, the U.S. has accepted more Africans as refugees than in the past. In 2011, more than 7,500 refugees were admitted to the U.S. from Africa.

Africans have also been big winners in the annual visa lottery. This system was set up specifically to mitigate effects of a family immigration system that has been dominated by relatively few countries. In 2011, more than 24,000 Africans gained immigrant status through the visa lottery, far more visas than immigrants from any other region of the world.

Immigrants entering the U.S. through these two streams will be able to sponsor family members, so Africans will increasingly have access to the family immigration system.

All this means that, in the citizenship ceremonies of the future, we will see more African faces as America becomes even more diverse.

This article was written for the National Immigration Forum, and was published on the website of the New Americans Campaign. 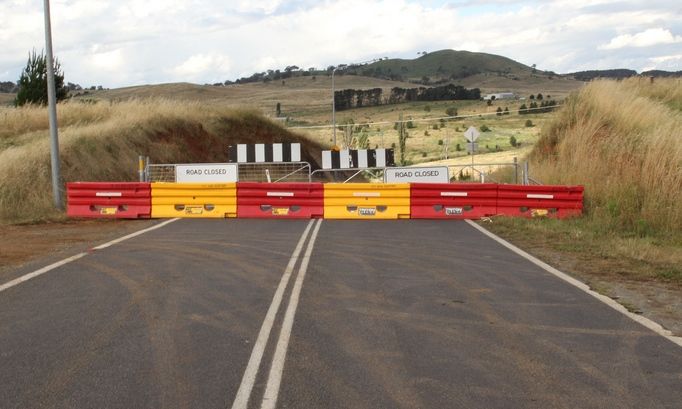 With the clock ticking on immigration reform in this Congress, House Republicans show no sign of bringing immigration reform legislation to a vote. Advocates, while still pushing House leaders to act, have begun to turn their attention to the president.

Since his State of the Union Address, the president has repeatedly promised to use his executive authority to do what he can on any number of issues that remain stalled because of congressional inaction. Immigration advocates—and some members of Congress—are urging him to use his executive authority to mitigate the suffering endured by families due to the broken immigration system.

President Obama has, up to now, maintained that he has limited authority to stop deportations. However, on March 14, the president met with reform advocates and told them he has ordered a review, in search of a more “humane” deportation policy.  Possible changes being considered, according to press reports, include the easing or stopping the deportations of persons who have no criminal convictions other than immigration violations and a limitation on immigration detainers. Experts—including former ICE Acting Director John Sandweg—have proposed other shifts in policy that would help ease the burden on families.

END_OF_DOCUMENT_TOKEN_TO_BE_REPLACED

On March 4, President Obama released his proposed budget to fund the government for the fiscal year 2015, which begins on October 1, 2014. Included in the budget are two naturalization-related requests, both of which, if approved by Congress, promise to increase the capacity of organizations nationwide to help eligible immigrants become citizens.

The first is a request we’ve seen since early in the Obama Administration: a request for funding for a citizenship and integration grant program. To quote from the budget document:

“The Citizenship and Integration Grant Program is the sole Federal program that supports the civic integration of lawful immigrants through citizenship preparation programs.”

Grants are awarded to immigrant service organizations that provide citizenship preparation classes, assist immigrants with their naturalization applications, or provide training to organizations to increase their capacity to prepare immigrants for citizenship. (You can see a list of the most recent grantees here.)

END_OF_DOCUMENT_TOKEN_TO_BE_REPLACED 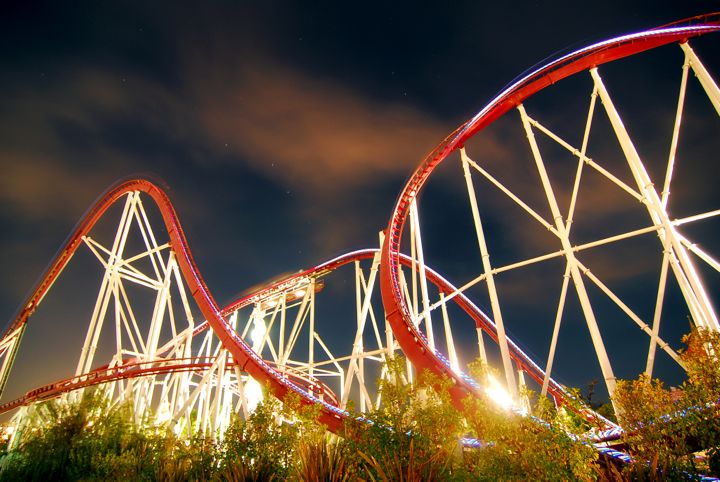 If the immigration reform debate was an amusement ride, it would be a roller coaster. At the end of last month, House Republican leaders released a set of “standards” that, they said, would guide their work on immigration reform in this Congress. A few days later, on February 6, House Speaker John Boehner went before the press to say that,

“…there’s widespread doubt about whether [the Obama administration] can be trusted to enforce our laws, and it’s going to be difficult to move any immigration legislation until that changes.”

END_OF_DOCUMENT_TOKEN_TO_BE_REPLACED

At a retreat of the Republican Conference at the end of January, Republican leaders released a set of “standards” for immigration reform. The standards acknowledge that the immigration system must be fixed, and Republicans will devise solutions through a “step-by-step” process. Their vision includes putting border security and interior enforcement first, implementing an entry-exit visa tracking system, a universal electronic employment verification system, reforms to the legal immigration system that include more visas for skilled workers and a workable temporary worker program, and some process for allowing the undocumented to live in the country legally (including legal residency and citizenship for young people brought to the country as children).

The standards leave much to interpretation. For example, regarding border security, the standards say, “[w]e must secure our borders now and verify that they are secure.”  What does that verification look like? The standards say “[t]here will be no special path to citizenship for individuals who broke our nation’s immigration laws….” Does this preclude citizenship for the undocumented?

All of this will become concrete once legislation is drafted in the coming months. For the most part, advocates are cautiously optimistic—encouraged that Republican leaders are acknowledging the need for reform, but needing to see how these standards are interpreted in legislation.